Menu
Log in
Register
Install the app
You are using an out of date browser. It may not display this or other websites correctly.
You should upgrade or use an alternative browser.

A Gripping Tale: Old School to Cool and Back 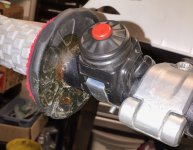 Some may not recognize this, a grip held in place with glue, not a clamping bolt. Not visible, a wrap of safety wire at each end.

For my first 48 years dirt riding, that was the way I did grips. Well, not quite. It took a while to learn the hard way that adhesive was even needed (hint: without barkbusters, a grip can pull right off the bar in wet conditions, rather than just spin). Then a bit longer to arrive at special purpose grip glue . It works better than the alternatives the magazines suggested, including gasoline (straight, not pre-mix!!), hairspray , spray paint. And a bit longer before I added safety wire to the mix.

But then nothing changed for decadess. Grip trends came and went, but I installed them the same way.

I eventually settled on ProTaper Pillow Top grips and had been using them about 10 years when...

…my 2018 Husqvarna arrived with clamp-on grips, like all the cool kids use. I rode with the stock grips for a while, did not like them as much as what I was used to. Aha! ProTaper sells clamp-on Pillow Tops.

They arrived and even before I opened package I could tell they were not the same. Flatter, not as cushy, more like Throw Cushion Top than Pillow Top.

And they did not have pop out ends (like the stock ones did) so I had to cut the ends off both grips.

Rode with them for a while, perhaps a bit better for me than the stock grips, but…